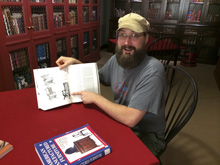 I grew up near Chattanooga, TN, nailing boards together from an early age in my grandfather’s woodshop. An ample supply of Legos kept me curious about how the universe was assembled. The love of patterns and design brought me to college pursuing a Mechanical Engineering degree and a fledgling beard. My student years ended, my beard was full and corporate life was disappointing.

With the generous help of my loving parents, I turned back to woodworking. My brother and I outfitted a workshop in the backyard and started a two-man “habitat enhancement” business engaged in home repairs and landscaping. A move to Folly Beach, SC found me still searching for how the universe works and brought me in contact with Brandy Clements, fresh from Chair Caning Boot-camp with her Aunt Linda.

Brandy and I began working on chair caning projects together while planning a cross-country move to Bellingham, WA. A layover in Asheville, NC turned into a love affair and a feeling of “Home” that continues to be intoxicating. A chair caning website, launched to advertise Brandy’s “side project,” soon crowded our house with chairs to be repaired and packed our hearts with aspirations. In 2010, we opened Planet Art in Asheville’s River Arts District with the thought that chair caning could be a small part of a larger project including a resident artist rotation and picture framing…but the chairs would not be forced into a corner and quickly took over the entire shop! Our vision for a chair caning school and museum began to take shape and in 2015 we followed the chairs into a larger space and a new adventure!

Chair caning, coupled with running the business, brings together a life-long love of learning, working with my hands, problem solving, process refinement and a demented pattern fetish. Too good to be true! The little time I have away from weaving chairs and crunching numbers is spent surrounded by books, stringed instruments and puppets…all to be included in a future adventure, yet to be determined… 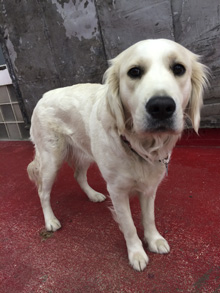 I have been around chairs all my life, which is only 4 years. I am a big puppy. But I’m a good puppy. And a lucky puppy too. I get to go to work with my people almost every day.

I  started out helping by pouncing on all of the dangling strings of plants and paper. When Brandy & Dave would blow in my face, I learned that they were actually doing something with the dangling bits of plant, like weaving them around those chair frames that filled the shop, so I stopped.

I then realized that there were pieces of the dangling strings of plants and paper on the floor, so I decided I could help by collecting them in my mouth and showing thim off to visitors. I’ve never had a taste for chair legs though.

My main job now is customer service. I growl and howl sometimes when people come in the shop, but it is totally an excited growl. I do like to give kisses (a lot) but I don’t bite. Brandy & Dave keep me in the back when I go to work, and from my chair next to the window, I can see visitors drive up. I nap a lot too. It’s hard work being a chair dog. 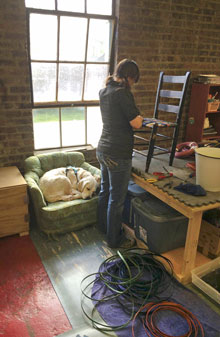 Confessions of a shameless chair nerd:

It’s a weird feeling when you know you are doing exactly what you are supposed to be doing in the right place at the right time. I am a chair nerd. I LOVE chairs. I have learned so much about chairs and it is just the tip of the ice berg. I am compelled to share my knowledge and encourage others to learn chair caning. It is a skill that is on the verge of becoming lost….but not if I can help it.

No. I didn’t always see myself as a chair caner, proudly carrying on the family tradition. I did see myself as a shopkeeper, an artist, an underwater photographer (not kidding), a brain surgeon, a physical therapist, a travel writer, a children’s book author, and I was pretty sure I was going to be a waitress forever.

Wanderlust: Like father, like daughter. I was lucky to go to Europe a few times before college. During college I taught arts and crafts at Falling Creek Camp for Boys in Tuxedo, NC and visited Asheville on my days off. I met lots of interesting people from all over the country and the world. After college, faced with crappy job options or more debt, I decided I would go WEST! To Colorado! But I ended up in Seattle, Park City, Bend, & Portland. Each place was a launch pad for numerous road trips. Alas, I missed my people back East. And if I were going back East, there was only one town for me…maybe two.

Asheville-Folly Tug-of-War: I came back East in 2005 and attended Chair Repair Boot Camp after constant “encouragement” from my dad. I got some jobs with furniture refinishers, but not enough to pay the bills. Then I got a chair caning job rushing 30+ chairs in Kasper’s Diner in downtown Charleston. Ed Kheiling got a really good deal on that job! As I was working on chairs at my sisters and at friends houses in Charleston, I decided that Folly Beach might be fun for the summer since Asheville was proving difficult to find a job. I began contracting out with local furniture companies like Chehaw River Woodworks. I worked on amazing antiques like a 1940’s FDR style wheelchair, and I also fixed contemporary designs like the cane chairs in the 5 star Charleston Place Hotel’s Palmetto Cafe.

Next thing I knew, it was 2007. I met a guy, one David Klingler, who was also getting ready to leave Folly for a more grown-up endeavors. I decided to take the yoga teacher training at Asheville Yoga Center and then stayed on for more study at the Asheville School of Massage and Yoga. I launched Operation-Make-Dave-Fall-In-Love-With-Asheville. It was a success, and next thing you know, our tans faded and our hair darkened and we were West Asheville Hipsters. And I was still a waitress (but it was Sunny Point, so it was awesome). In fact, I was so typically Asheville: waitress, massage therapist, yoga instructor, artist. The chairs business was picking up and between my four jobs, Asheville was working for me this time.

And then I fell in love with chairs: I applied to be an Artist in Residence at the Grove Arcade Arts and Heritage Gallery in the fall of 2008. Here, doing public demonstrations I realized how freaking cool chair caning is. I began researching history and paying attention to chairs like never before. I began making original contemporary antiques by refurbishing, painting, and re-weaving old chairs. I continued doing demos at the True Nature Country Fair, outside of Mountain Made. Once I put together a website in 2010, the chairs exploded all over the house and we were compelled to look for designated studio space.

Dave and I restored chairs in a 500 sq. ft. windowless studio in the River Arts District for 5 years. In 2011, I was accepted into the Southern Highlands Craft Guild among really impressive artists and extremely cool people. It continued to rain chairs on our heads and in 2014, we decided that we needed a larger space (and sunlight). We are forever indebted to Mountain BizWorks, Jodi Rhoden, and Annie Price at Birds Eye Business Planning for invaluable education in business. And all that yoga and massage training has been priceless due to the physically demanding work of chair caning.

The last few years, we have been attending conferences and learning more about the academic side of chairs, their history and design. We joined The SeatWeavers’ Guild, Inc. and hosted the 2016 Annual Gathering at the Folk Art Center with over 90 chair caners from all over the country in attendance. I’ve been to the Art of Seating Exhibit in Winston-Salem, Richmond, and Reading, PA and have researched chairs at every opportunity. I love discovering chair caners all over the world on social media. I spent my 40th birthday in England researching chairs, and went to Scotland a couple years later to study Orkney Chairs. I keep in touch regularly with caners on 6 continents, sharing photos of each other’s work and communicating through google translate.

Silver River Center for Chair Caning: So here I am, a little over 40, a total chair nerd. I’ve been in the same town for 10 years. I am in love with Asheville and I am grateful to be able to do business in such a supportive community. I have learned quite a bit about business as well as chairs the last 10 years. Often I spend more time on the business than working on chairs and I yearn for that laid back part-time chair caning I used to do. Dave and I really love these chairs and put our best selves into each project…and we are so grateful to everyone who helped us open this chair caning school and museum! What a trip.

For detailed directions and map,
see our Contact & Location page.