Posted by brandy in canespotting, Travelogue 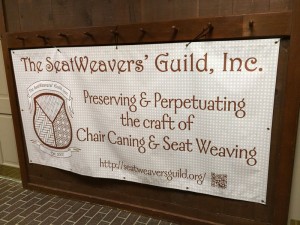 Join today! a tax-deductible contribution to revive a dying art.

As time draws near to the 2015 SeatWeavers Guild Annual Gathering, I am compelled to tell the story of the momentous 2014 Appalachian Chair Caning Tour to New England (sweet New England).  So much has happened because of that trip. So much that I neglected blogging for a solid year of work to make the chairvolution from Go Chair Repair to Silver River Center for Chair Caning.

One fateful day, out of the blue, Ms. Cathryn Peters (wickerwoman.com and founder/former president of the The SeatWeavers Guild) sent me a message encouraging me to attend the 2014 Annual Gathering.  I have a bit of wanderlust in me. I am a chair nerd. A trip to New England to hang out with chair nerds!? Lets hit the road. 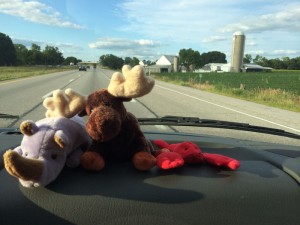 With the soft tunes of two local musicians in my head, Dave and I made our way through the Shenandoah Valley and the farmlands of Pennsylvania. We detoured through Gettysburg and quaint towns with tiny brick architecture and centre squares that were actually circles. We made it to the giant shoe house as the sun set and moved on to find lodging in the Amish Country. 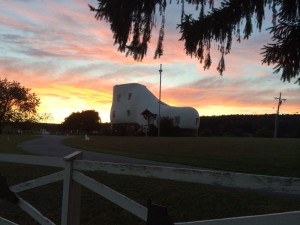 Well, that was the plan.  Every.  Hotel.  Was booked. Adios Lancaster. We’re heading to Reading.  (That rhymes, for those of you who, like us, did not know the proper pronunciation.) We could barely make out the silhouette of a horse and buggy on the way out of town. Feeling very pouty and slightly defeated, we drove half an hour north…and this is where the magic happened. It was like fireworks going off signalling something big about to happen.

Actually fireworks were going off right over our exit.  We arrived at the Comfort Inn, where the desk clerk asked (with a wink) if I was a professor at Whatever College. I agreed that indeed I was a professor at Whatever College.  He replied, “great, we’ll just add that discount to your room.”  Cozy in our room, Dave researched some places to see in Reading and, being the shameless hipster Ashevillans, we opted to check out The Chatty Monk Brewery. 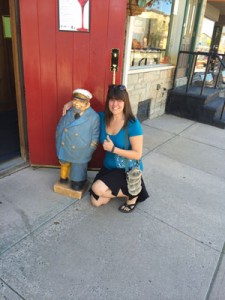 July 25, 2014, my dad’s birthday.  (Talk about a guy who knew how to live life to the fullest, only to live it 20 years shorter than he would have preferred.) The sun was shining.  It was extremely pleasant outside. We discovered a local Amish market that made up for missing the giant Amish market in Lancaster. We arrived at a very charming shopping area and found a perfect parking spot. We walked the short block to The Chatty Monk and were greeted by a carved Old Salty statue on the sidewalk (which is a sign from my dad saying “what’s up bub?!”). 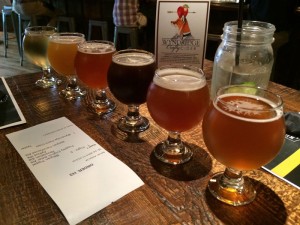 Moments before we were to be directed to our destiny.

The waiter at the Chatty Monk was very cool and asked what we did. “Chairs,” we said. “You’re chair people?” he asks incredulously. “There’s an exhibit right around the corner with tons of chairs.  Frank Lloyd Wright chairs, and just tons of chairs. Literally less than half a mile away, you could walk.  It’s extremely pleasant out.”  So we did.  And it was.  The Public Library’s name does not do it justice.  There was a river and an arched bridge, sprawling lawns, an observatory, and a banner with half a dozen chairs on it to let us know we had arrived at our destiny…I mean destination. (Actually, it was totally destiny.) 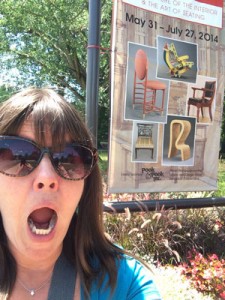 Chair nerd about to totally freak out.

Chairs, chairs, everywhere.  And not enough time to get on our knees and look underneath all of them to make sure the bottoms looked as good as the tops.  There where Hunzingers, Egyptian Revival, caned chairs, cardboard chairs, acrylic chairs, Eames chairs, Windsors, ox horn with blue silk, you can’t even begin to get the picture.  There were the two rattan chairs that Kennedy and Kronkite sat in for a famous interview, the first of its kind in that time.  Sadly, no photography allowed.

There were so many chairs. And so LITTLE TIME!  WE had 8 hours of driving to do to get to Massachusetts and check in for the SeatWeavers Guild conference.  AND we had to stop in (detour 2 hours) at The Country Seat in Kempton.

Giddy and slightly shocked at our reaction to a room full of wicked cool chairs, we vibrated out of the Public Library and hustled to the van.  We headed out under the Reading Railway bridges and out of town.  So long Reading, thanks for the random chair show.  And thanks Lancaster, for not having a single room. 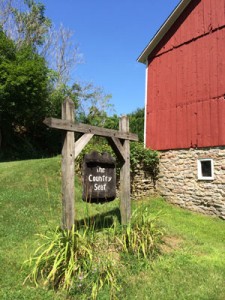 Beautiful drive to The Country Seat.

Did I mention that it was extremely pleasant outside?  We bounded over hills, by rivers, through the woods, past barns with quilt squares, way way way in the middle of nowhere to The Country Seat, a family owned basket and chair weaving supplier. It was, in a way, a bit of a pilgrimage for our chair business.  We tell people about them, order from them, talk to them on the phone, get advice and here they are! We were greeted by Angie and she was very cool while we totally geeked out on being chair nerds fresh from a unbelievable chair exhibit.  We spent quite a while with shop talk and left with some purchases and still another 8 hours of driving to get to Massachusetts. 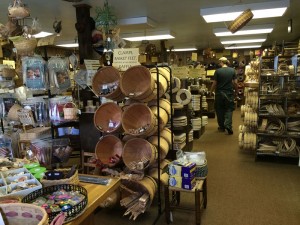 The Country Seat. Inside.

Finally settling down from the excitement of Reading right around the Catskills, we drove through lush scenery and some wicked traffic and then down into the Hudson River Valley at sunset so I could see the town of Peekskill, NY.  I am going to date myself by saying that I had to go there because that is where the school from the Facts of Life was supposedly located. It was not as exciting as a chair show, and I did not see Tootie, Jo, Natalie, Blair, or Ms. Garrett. 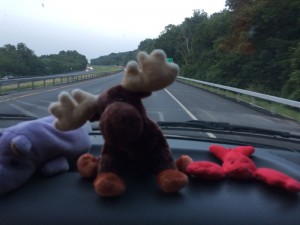 Fortunately the sun had finally set so we weren’t enticed with any more detours.  In Connecticut, I got a doughnut at a gas station (as a nod to an old friend), and then next thing you knew, we reached our destination (don don donnnnnn) Sturbridge, Massachusetts, and our pretty awesome hotel at about 11pm.  We had to be at the conference by 8am.  It had been a full day, but we were still probably not going to sleep with the fact that we were in the presence of greatness…and by greatness, I mean all the SeatWeavers Guild people I’d known from the interweb, but had yet to meet….we were going to be hanging out with 50 chair caners and it was easily as exciting as the random chair show.