Is it possible to fall in love with 7 people in a week? 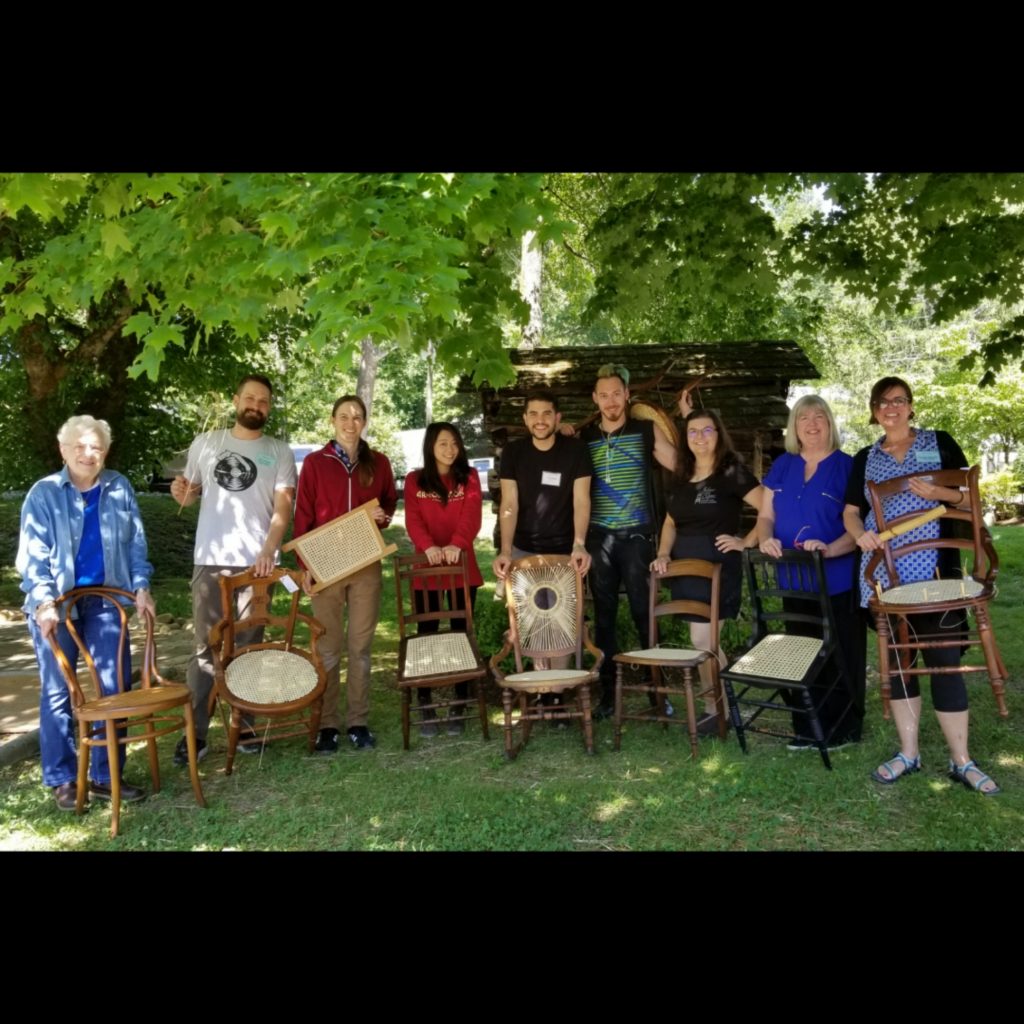 Yes it is. If your students are as badass as those in our Chair Nerd debut at Arrowmont last summer. I mentioned in the previous post that Arrowmont is a bit of a bubble like summer camp. You make instant best friends and you feel like part of a community, all within a week. 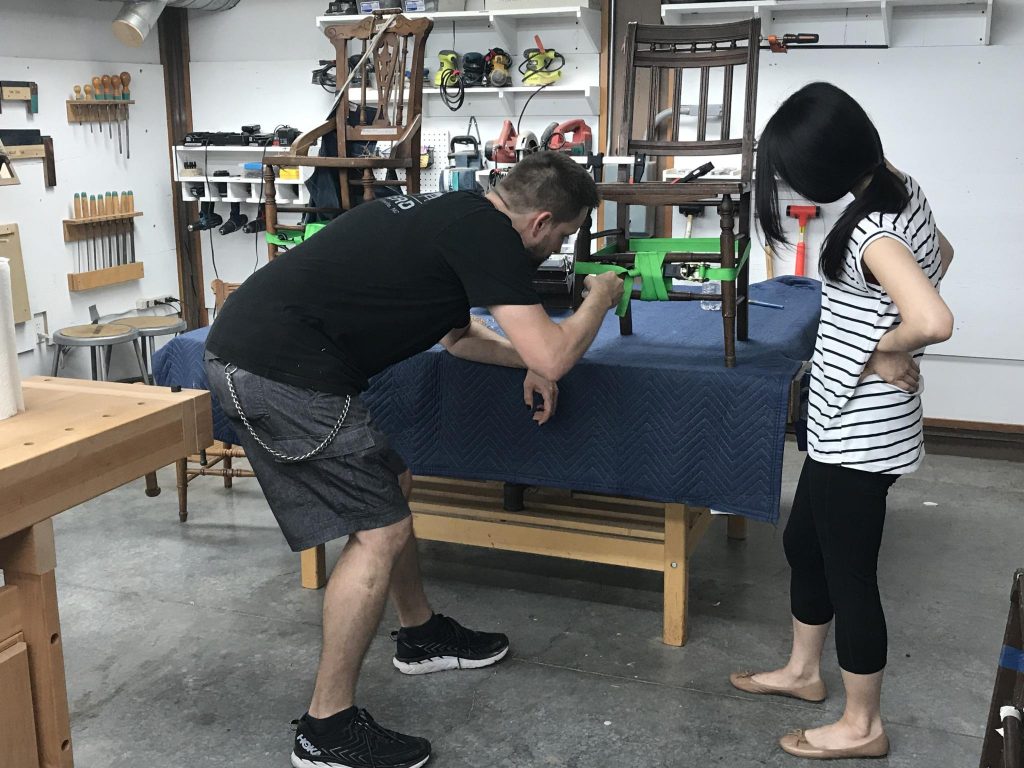 Esther wanted to learn everything, not just weaving, but also structural repairs that have to happen before you begin weaving.

Our students were so enthusiastic and inspiring in different ways. We typically talk back and forth with students for a month or two before the class. There are many nuances to caned chairs and we want to set people up for success…a tip I learned in dog training class. In our shop, we can improvise: the student brings an advanced chair they have no hope of finishing in a week? No problem, we have extra chairs. Chair too broken to weave? No problem, we have all the tools and parts to make the repair happen quickly. Chair has to be disassembled before weaving? No problem, come in the day before and we make it happen. Last minute sign-up? No problem. 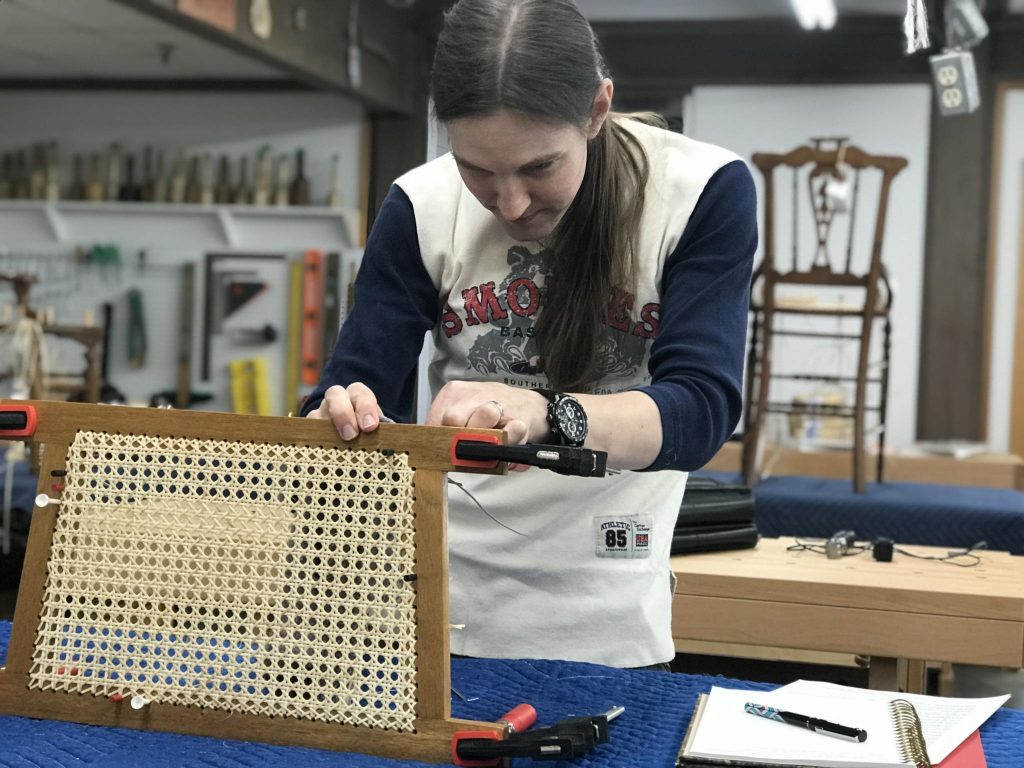 Bryan made a canoe in a previous class at Arrowmont, and then built the canoe seat to cane…with over 100 holes and fine-fine sized cane, making it quite an advanced project

Its different teaching off site. The other school handles the sign-up, they ask the students to contact us before the class, but it doesn’t always happen. In this case, all of the above issues happened and we were a little nervous. You can’t pack your whole shop and move it in, though we certainly try when we go on location. If it is your first time teaching in a new space, you don’t know the flow of the room. If you need something, you don’t know where to look, and looking involves students waiting while you look…like you don’t know what you’re doing.

We have control issues with our classes. Many schools offer to buy your materials so that you don’t have to buy it, pack it, and transport it. Thanks but no thanks! With 10 different sizes of cane coming in a variety of configurations, and some of it often back-ordered due to tariffs and embargoes, we can’t risk finding out a week before the class that the material isn’t in stock. 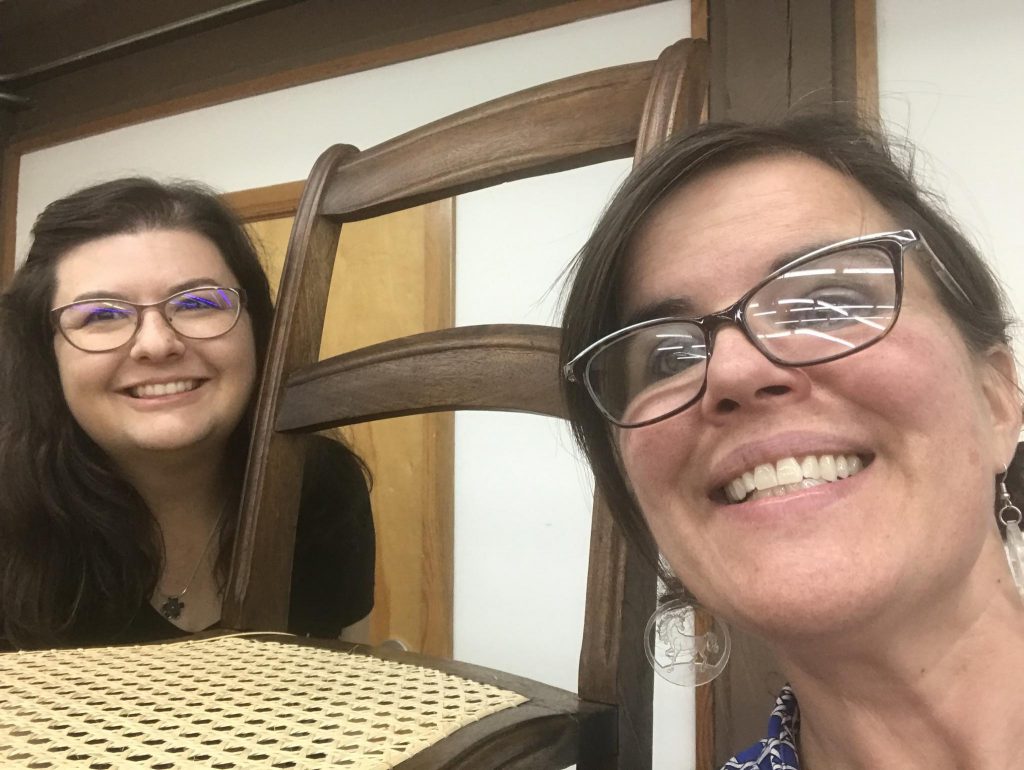 Heather, obviously a prodigy, and technically my boss, the badass maker and female director of the woodshop

I mentioned previously that Arrowmont is on top of their game with organization and making life easy for the teachers. I didn’t mention that in 2018, the day before Thanksgiving, we were at Arrowmont for a private tour with Heather Ashworth, the director of the Woodshop. Yes, their wood program is run by a woman. Heather took us on a tour of the campus and the studio, which gave us the opportunity to troubleshoot any issues before we moved in. She gave us her cell number and then signed up for the class! 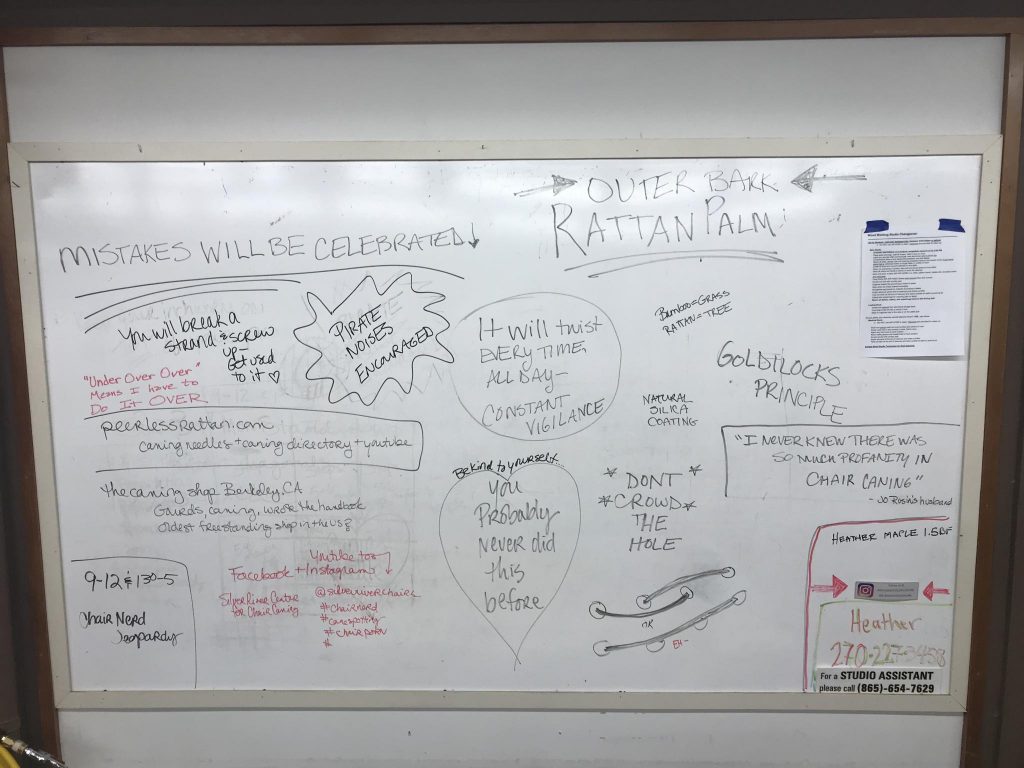 The whiteboard was fun to have in the shop so we can display The Tao of Chair Caning prominently and remind students that mistakes will be made, cane will break, etc.

Fast forward six months. We were stressed as hell. Dave’s father passed away in February. He was out of the shop a lot in the months before and a couple of weeks after. We went immediately to teach 125 4th graders in South Carolina in late February, did the American Craft Council Show in Atlanta in mid-March. A friend of ours was in and out of the hospital from March-May. We hosted a Chair Nerd Summit in our shop and hosted our bi-annual 2-week boot camp in April. Meanwhile our clients waited patiently for their chairs, neglected due to life and death and work travel that had been arranged a year before their chairs arrived in the shop. We hustled to make chair restorations happen and get all the details down for the class at Arrowmont in early June, and The Furniture Society Conference in Milwaukee the very next week! We. Were KNACKERD. Shell-shocked. Treading water. 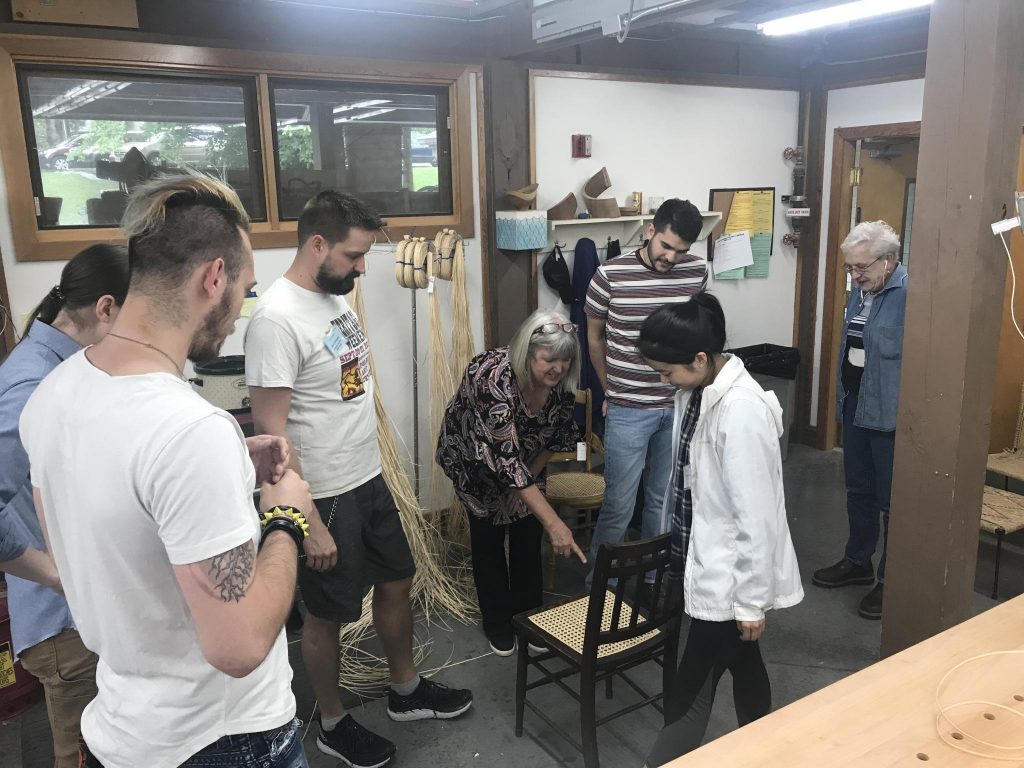 Everyone stopped what they were doing to celebrate when Carol finished the first chair in the class. This enthusiasm was exactly what we needed to hit the reset button.

We left for Arrowmont hoping for the best and we left Arrowmont feeling on top of the world. It exhausts me to write about it all in one paragraph. “Work for yourself, be your own boss, set your own hours, make the dream happen.” It all sounds great til you’re in the thick of it and you don’t plan on your father dying or your friends being sick. Fortunately we have a wonderful volunteer who really enjoys kicking us out of our shop and claiming it for his own. And a former intern left her job right before we left for the trips, so we felt ok leaving the shop. How we felt? We were rolling with the punches. Hoping for the best. 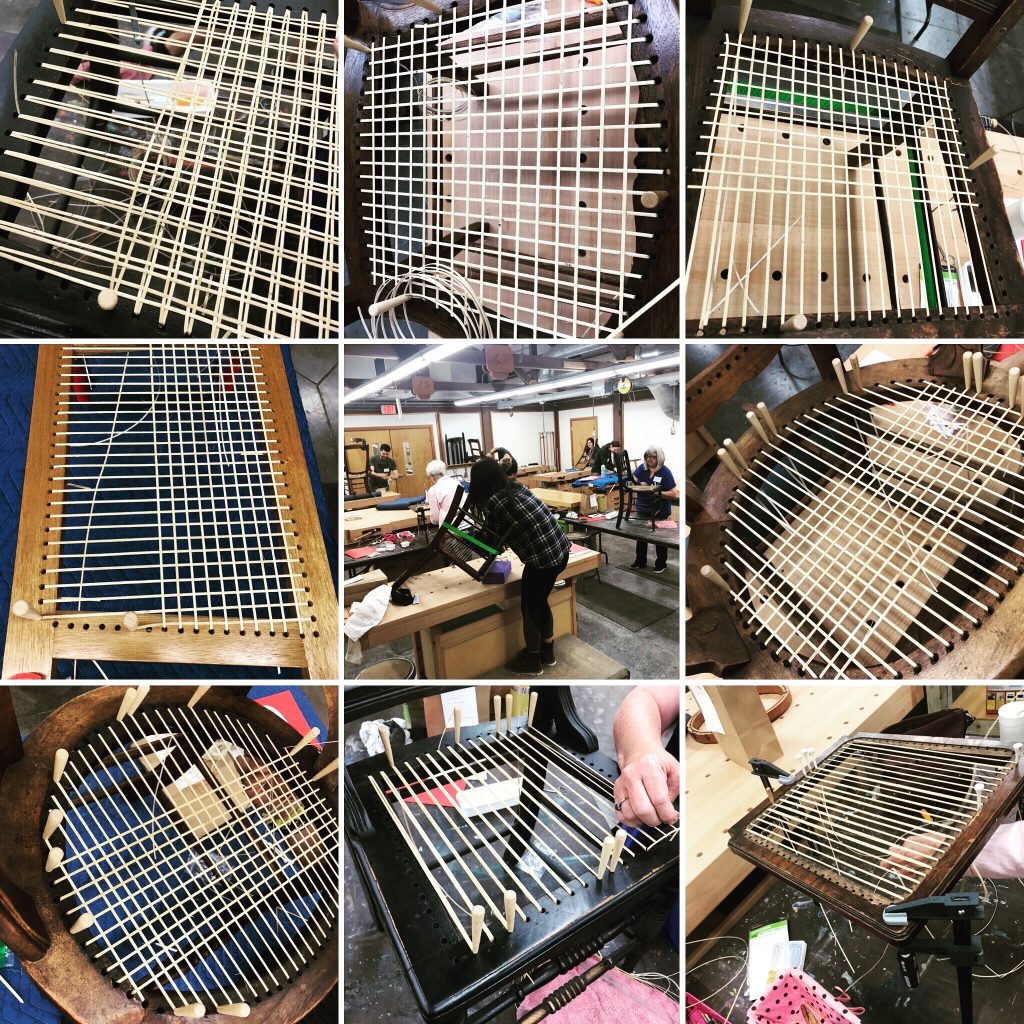 There is no such thing as a normal chair seat. They all have different shapes and different sizes of cane, different construction elements…

Teaching takes a lot out of you mentally. You have to bounce between different chairs at different phases. You manage different personalities, teach to a variety of learning styles, being positive and encouraging and separating yourself from the freight train of life and business to be in the moment. You can’t think about speaking to a group of professional furniture makers in Milwaukee in a week. You want your students to embrace the craft, to spread the love of chairs across the land…but in an offsite class, it’s not just your students, you also want to impress an internationally renowned hundred-year-old craft organization. So, no pressure. Make each student love the craft (one of which is technically your boss). Show the organization you are on top of your game…and demonstrate to The Southern Highland Craft Guild that you are worthy of being an Official Education Center along with Arrowmont. Did I mention that Arrowmont is also very connected with the Furniture Society? 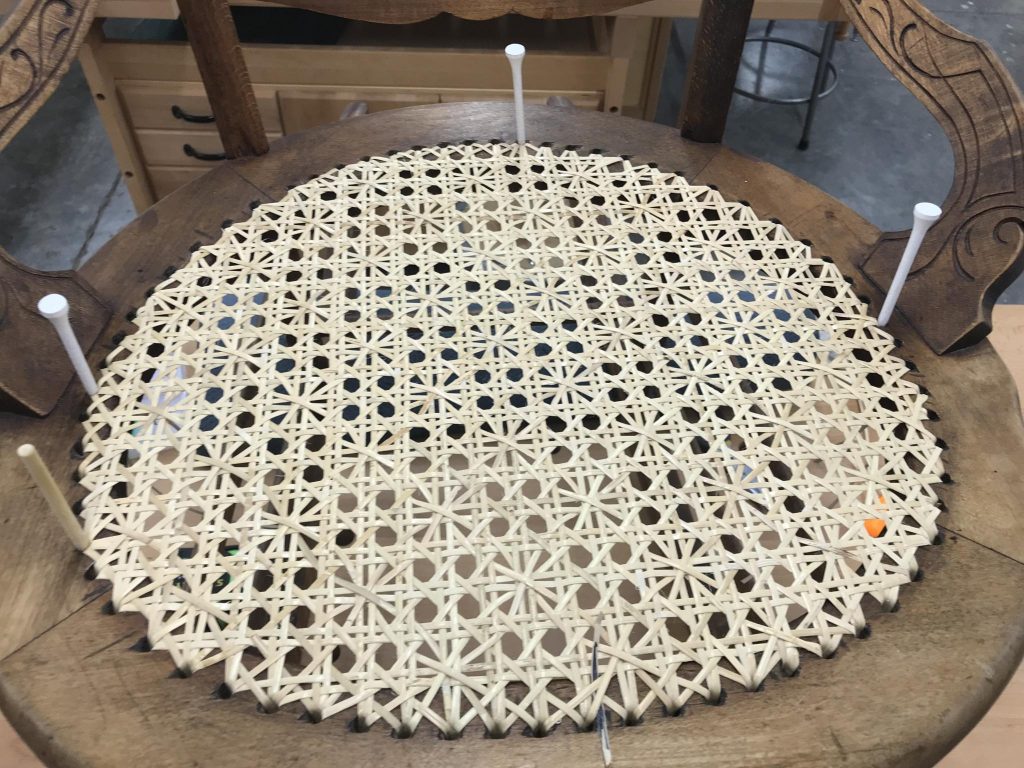 Horacio’s first seat is intermediate, not only because of the more complicated round seat, but also the daisy pattern. Thanks for making us look good!

You already know how the story ends…fairy tale ending. In love with 7 people and their chairs, rejuvenated by the experience. But let me tell you a bit about these very different people and how each of them contributed to my return to sanity and enthusiasm for my craft, how they set me up for success in Milwaukee. Carol brought sunshine. Ruth made me laugh. Heather made us feel like we had been there forever. Bryan was immersed in the craft and eventually took a class at our shop. Horacio brought innovation. Stephen broke the mold. Esther demonstrated that people are crazy when they say “kids these days don’t appreciate caned furniture.” I couldn’t dream up a better group. 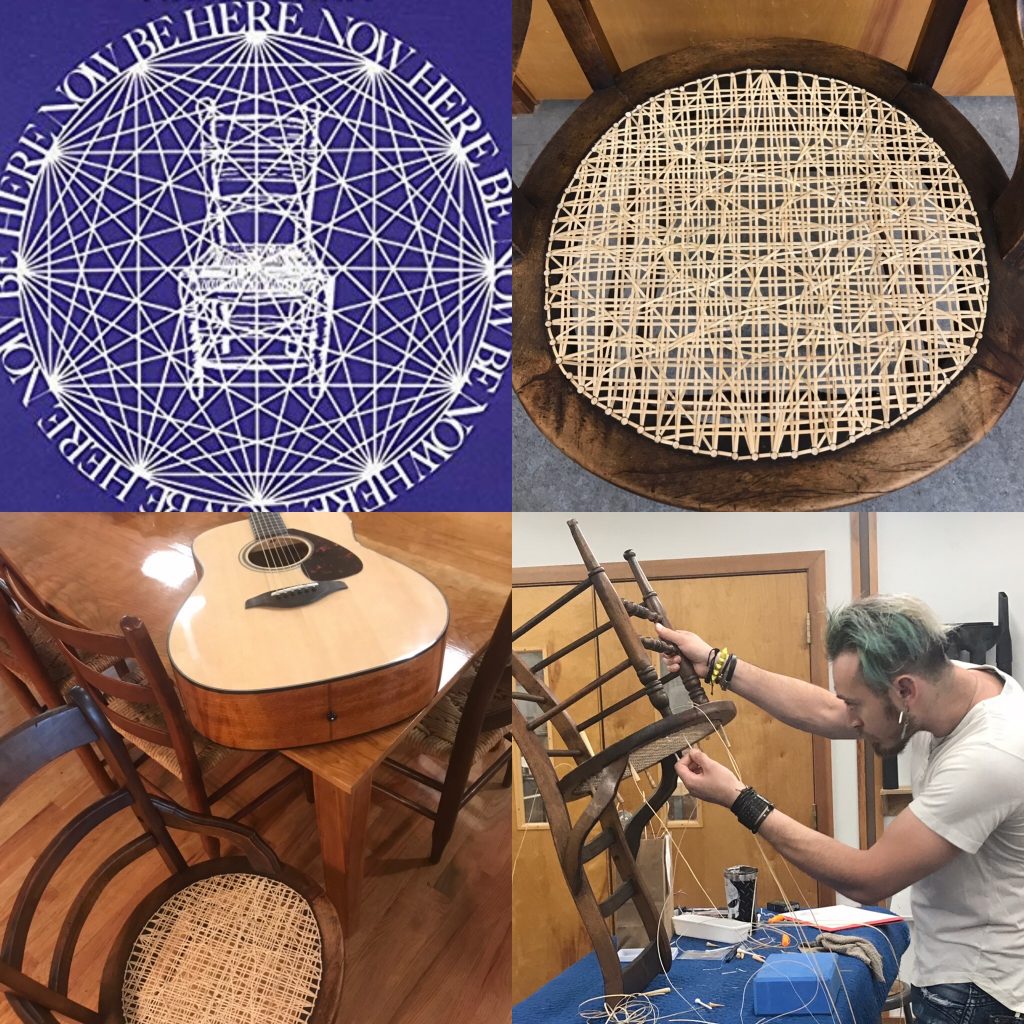 Stephen wanted to do something different, and without knowing of Be Here Now by Ram Dass, he created a chair like the cover of the book, and he brought the chair to dinner to sit on while he played guitar for the school.

In any good story, alongside the main characters, there are the extras: I mentioned a few of the instructors and their work, but didn’t mention my own presentation and slideshow. I’d rolled out A Brief History of Chair Caning a couple of times. Informally at a couple of different venues, once with slides but with technical issues, and a warm up with slides which went smoothly at our Chair Nerd Summit in the shop. I was excited but a little nervous to speak at The Furniture Society Conference right after Arrowmont. Their members have been in the industry for decades, teach at universities, are museum curators, etc. I wasn’t nervous about my instructor presentation at Arrowmont. I was looking forward to the warm-up for Milwaukee…until I saw how well attended these events were. 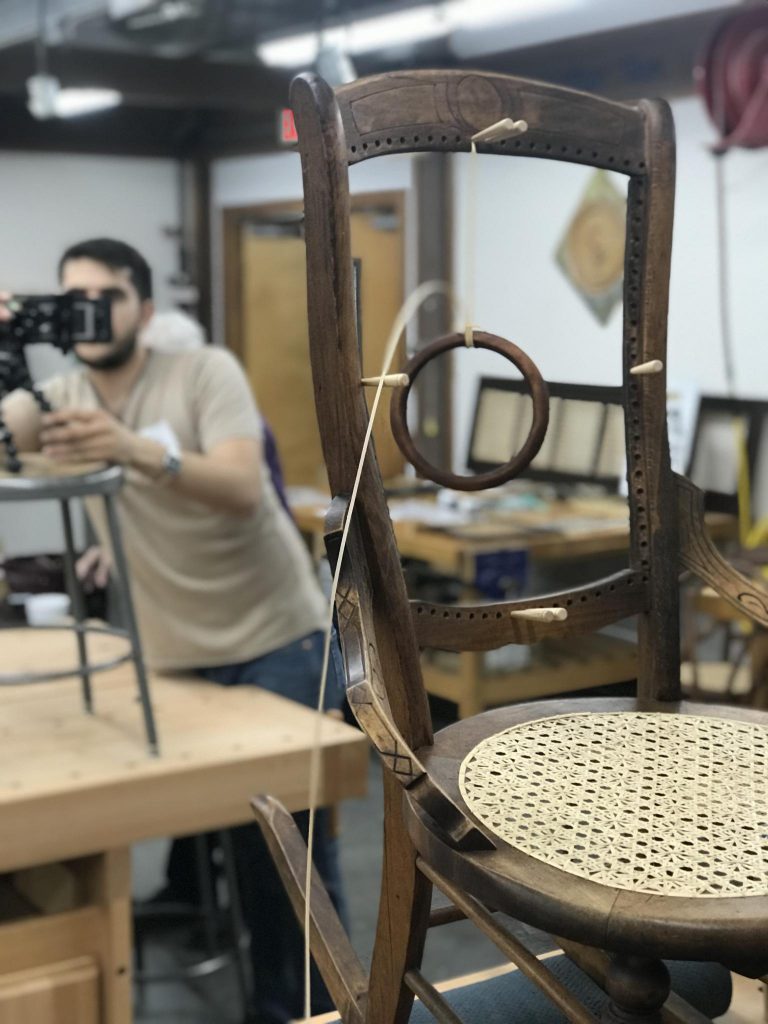 Horacio documented the process and innovated a new method of weaving the back.

There was a stage and a podium and an audience of almost 100 people! To this point, 30 was my largest audience. It didn’t matter that the audience at Arrowmont were mostly not in the furniture industry and I could screw up and they’d have no idea. It didn’t matter that the hundred faces were in the dark. All of a sudden I had 24 hours of “oh sh%t” while also teaching during the day. The presentation was quick, 15 minutes, and I anticipated it being like the montage of David Letterman’s years on the Late Show (worth a watch, it really gets going at 2min 37sec) and I had the Foo Fighters queued up in my head so I could blast through the slides and wow the audience with the sheer abundance of chair nerdery. It was over before I knew it. Sigh of relief. 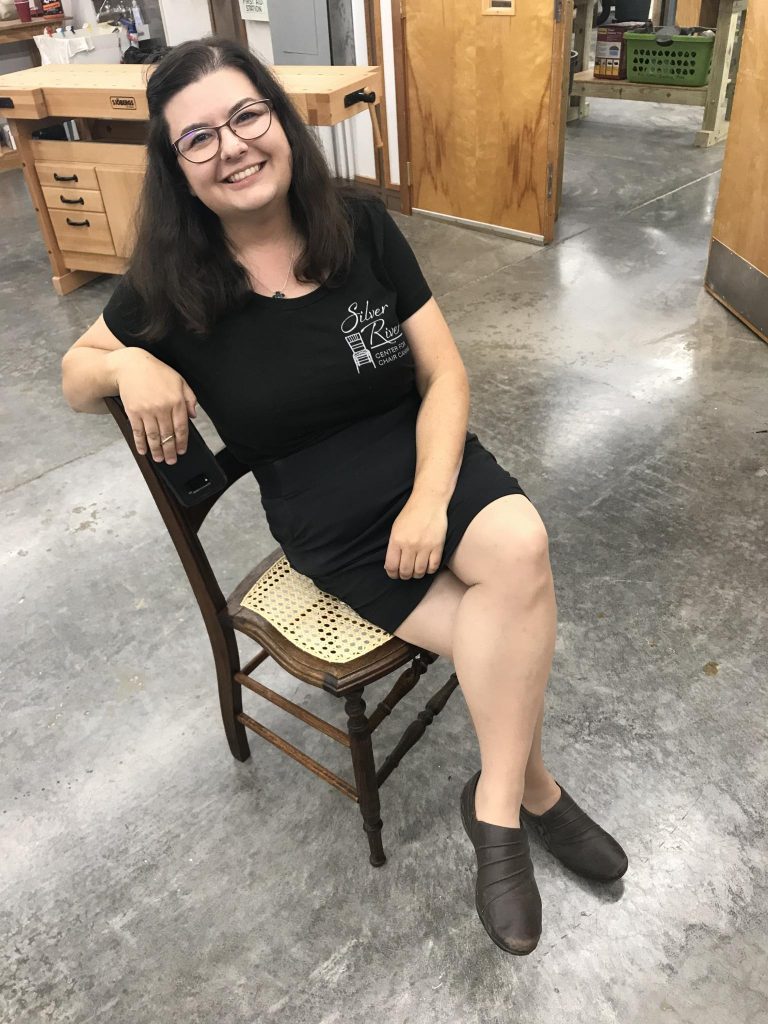 Yes, you can sit on it! Heather managed to execute a perfect seat despite being called out of class for work on a regular basis.

What I didn’t expect was a bunch of 20 somethings coming up to me afterwards telling me how cool it was. (I don’t care if they said it to everyone. They didn’t have to be there, or pay attention, or take the time to say something nice to me.) And they kept coming up to me the next several days, telling me they saw woven chairs in town, woven panels on bathroom walls at the bar, coming into the shop and being nerdy about chairs the rest of the week. I hear it all the time. “Young people these days, they don’t care about antique furniture.” Not. True. While, yes, Ikea furniture is cool and Kids These Days love it and I love it too, lots of young people are spending their twenties doing the craft school circuit. If Kids These Days don’t appreciate antique furniture its because they aren’t asked at an early age if they want to be a Furniture Maker, they are asked if they want to be a Lawyer. 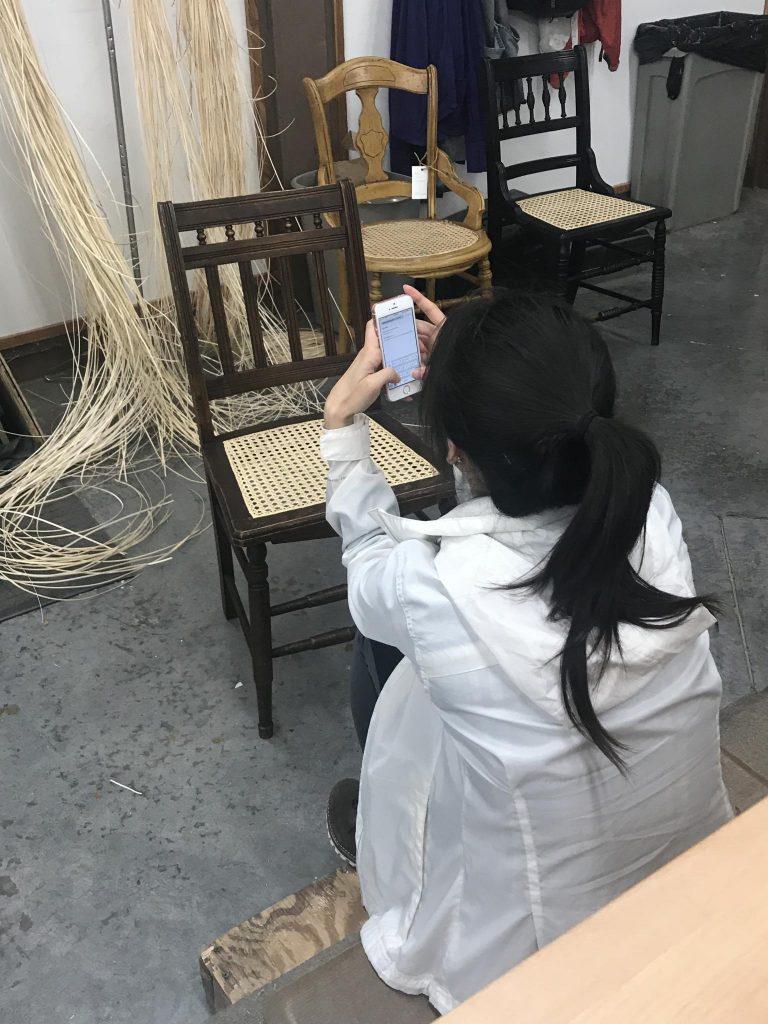 I loved how everyone documented the process, it may seem tech-focused to those who didn’t grow up with iPhones, but I think it will help them be successful on their next project.

I am jealous of these 20 somethings on the craft school circuit, lots of them get looked down on as flighty and uncertain about what they want to do with their future, but in my opinion, they know what they want to do and they’re doing it. They just aren’t aiming toward law school because “that is what you should do.” I recently met with a lawyer from Seattle wanting to do an apprenticeship because she feels humiliated and disrespected on a daily basis in her current job. I have had students who are doctors but are not fulfilled and want to work with their hands. The desire to make stuff is deeply imbedded in humans. I am thrilled to be a part of a few organizations that foster this for people of all ages. Thanks Arrowmont…I really do love you.  Here are a few more pictures: 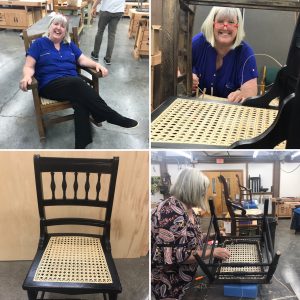 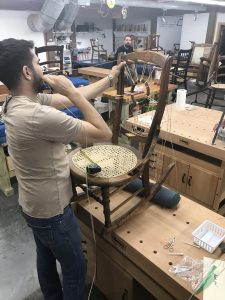 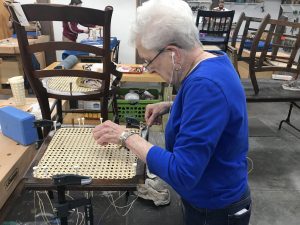 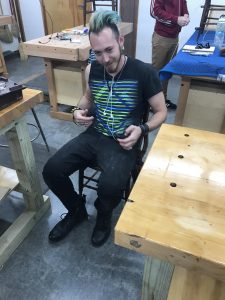 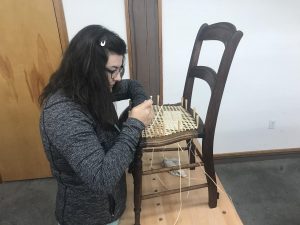 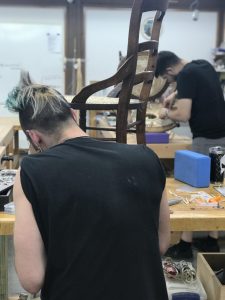 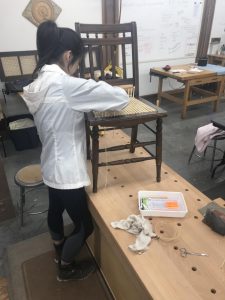 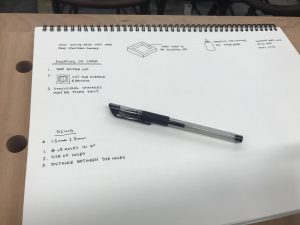 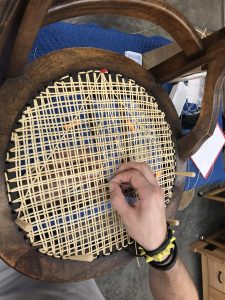 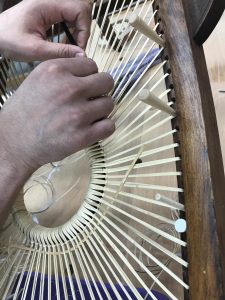 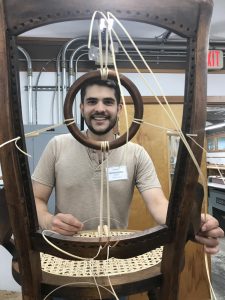 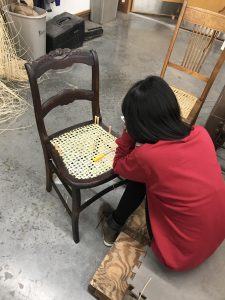 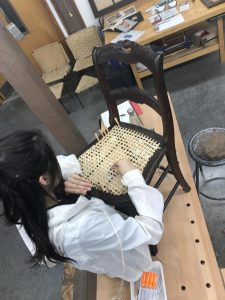 <
►
>
Horacio was fascinated by the medallion back chair we showed in a photo book. He wanted to make his own medallion but opted for this never done before ring configuration. It ended up making him a cover model in the Arrowmont 2020 catalog!
Share this article...